PRIVATE TWIN CABINS (GREEN) - The four cabins in this category have above and below berths with a single size mattress above and a single sized mattress below. These are cabins numbered 1, 2, 7, and 8. These cabins are significantly smaller than the Yellow cabins. But they are nonetheless comfortable outside cabins with large windows, private bathrooms, and air-conditioning.

PRIVATE TWIN CABINS (YELLOW) - The five cabins in this category are large and have beds side by side. They are numbered 3, 4, 5, 6, and 0. Cabin 0 has a queen size bed beside a single bed.

Voyage to the Heart of the Amazon
This is the most exploratory cruise in the entire Amazon - and is the Amazon’s only true expedition cruise. We venture al...
read more
Into the Wild Amazon
This cruise pushes beyond the limits of typical tours and beyond the boundaries of human settlement, to explore remote rainfore...
read more
See all upcoming cruises

The Amazon expedition cruise vessel MY Tucano has comfortable cabins with large beds and private baths, and is air-conditioned throughout. With our small groups (Max. 18 pax), trained naturalist guides, and thoughtful itineraries, we offer a genuine, thrilling experience with the REAL Amazon rainforest.

The Salon of the Motor Yacht Tucano is at the forward part of the vessel and is surrounded by a broad balcony. Thoroughly paneled and lighted by brass lamps, this room serves as our vessel library and dining room. It is a good place to observe the forest, read or relax. From this large space, filled with windows and situated at the front of the boat, you can see the fantastic forest around us.The top deck is open and has a large sun canopy --a wonderful place to spot wildlife or soak in the vastness of the Amazon. There is also space to catch some sun and watch the Macaw parrots screeching across the afternoon sky. The middle deck has a wide balcony around the entire front of the boat. Passengers can see where we are going and observe monkeys jumping from one vine to another.CabinsAll of the 9 cabins are comfortable. Most cabins have individual beds and some have above and below beds. Each cabin on Tucano has a private bathroom with a shower, toilet, and a sink. We have hot water pressurized showers.Windows to See the ForestThere are 76 large windows on Tucano and all of them open and close. There are large insect screens, though generally there are very very few mosquitos on our voyage.Air-ConditioningAll the cabins and the Salon are air-conditioned. Every cabin has its own thermostat and individual controls. Your cabin can be as cool or as warm as you wish.Beautiful WoodworkAll of the walls in the cabins have solid wood raised paneling... varnished and absolutely superb.Lovely DecksThe decks in the cabins and living room are a deep brown natural finished wood that is kept highly polished.DiningOur meals are not gourmet, but wholesome, filling and delicious. We also serve many types of Amazon Fruits. Our cooks rise before dawn to make a large breakfast and there is always a tantalizing scent coming out of the Galley.

Best time to travel in the Central Amazon

Our trips take place in the very middle of the Amazon - a thousand miles from the ocean and 1700 miles from the Andes. We begin our voyages at about two degrees of the Equator and we explore north on one of the least inhabited, and wildest rivers in the Amazon, The Rio Negro. The temperatures in this area are warm year round, so the most important seasons are the rainy and dry season - but read on below and see that the rainy season is a good time to travel! The rainy season runs roughly from mid-December to mid-May, the temperature is a bit cooler than the dry season which runs roughly August -November. Amazonia!

One important weather fact about central Amazonia is that it rains much much less than in the Peruvian Amazon or at the eastern Amazon of Brasil. It rains as much as 30% less than in these regions so the rainy season is much less pronounced. The average daytime temperature in the rainy season is usually in the mid-80's [F] with nighttime lows in the mid 70's to high 60's. In the dry season the daytime temperature can go up to the mid-90's though there is much variability and cool days are common. Nighttime temperatures during the dry season are usually in the mid-70's, though there are also some very cool nights.

Rainy SeasonSo, is it desirable to travel to the Amazon in the Rainy Season? Yes! Even though it does rain more this time of year, it is also true that many plants have evolved to fruit and flower during the rainy season which attracts pollinators, birds, and primates to the water's edge for us to observe. When it rains our expedition boat The Motor Yacht Tucano is very comfortable and will keep us dry and when the rain stops we go out exploring again. The gigantic thunderstorms are even a great pleasure to observe from the windows of the salon.

Dry SeasonHow about the dry Season? The dry season has some advantages too. The weather is dryer but more importantly, the lower water attracts some kinds of creatures that are not as commonly observed in the rainy season. The dry season is a time when the levels of most of the rivers in central Amazonia begin to drop, showing sandy beaches. This is a great time to see beach nesting birds like black skimmers and many kinds of terns, and also this is when the crocodilians of the Amazon mate and lay eggs..... and it is one of our travelers' great pleasures to listen to them bellowing to one another in the dark Amazon night. When the waters are at their most shallow, in November through January, it is sometimes possible to see millions upon millions of migratory fish in the shallows laying eggs. These fish attract every type of tropical fishing bird including large storks, spoonbills, osprey, and countless millions of swallows. The Amazon's marine mammals, pink and grey dolphins and giant river otter crowd into the smaller channels gorging on the abundance of fish. 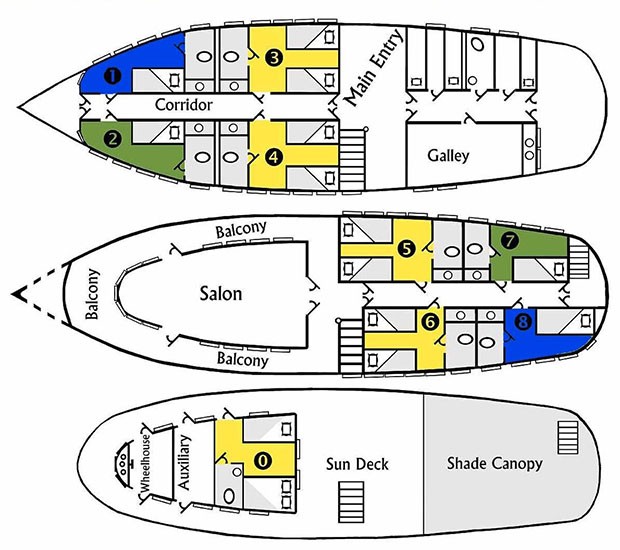