• Discover the Isles of Scilly - a group of small islands off the coast of Cornwall boasting mild weather, secluded beaches, enchanting wildlife and a relaxed lifestyle • Visit the Skellig Islands. These remote, uninhabited rocky islets off the southwestern coast of Ireland are a favorite breeding site for seabirds, including thousands of Atlantic puffins and a large colony of northern gannets • Explore beautiful and serene Iona, a small island in the Inner Hebrides

Start your voyage in the port city of Plymouth in southwest England, where a rich maritime heritage sets the mood for the beginning of our exciting voyage. Visit Scotland, Ireland, Orkney Islands and Shetland Islands.

This voyage offers a wealth of subjects for photographers of all levels and interests. Our included photography program gives you the chance to learn and practice your skills alongside a professional photographer. Zoom out to capture dramatic landscapes of sweeping moorland and rugged coastlines or go macro to expose the beauty of flowers. You will get plenty of practice with the special art of architectural photography as well. From historical monuments to colorful puffins, the sights on this voyage will make a photographer out of anyone. Our expert will be there to help you make the most of the bounty in your viewfinder.

Huw is a historian of exploration, culture, photography and the environment, with a PhD from the University of Cambridge. He is the author of award-winning books but is happiest when out in wild nature. Huw was Curator at the Scott Polar Research Institute and the National Maritime Museum in London. His books include Imagining the Arctic, Polar Portraits, The Conquest of Everest, winner of the History Award at the Banff Mountain Festival, Across the Arctic Ocean, and Explorers’ Sketchbooks, an art history of discovery. His books have been published in 15 languages.

• Discover the Isles of Scilly - a group of small islands off the coast of Cornwall boasting mild weather, secluded beaches, enchanting wildlife and a relaxed lifestyle • Visit the Skellig Islands. These remote, uninhabited rocky islets off the southwestern coast of Ireland are a favorite breeding site for seabirds, including thousands of Atlantic puffins and a large colony of northern gannets • Explore beautiful and serene Iona, a small island in the Inner Hebrides 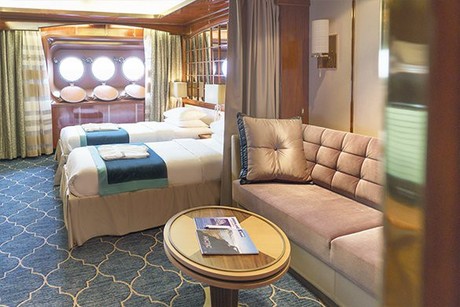 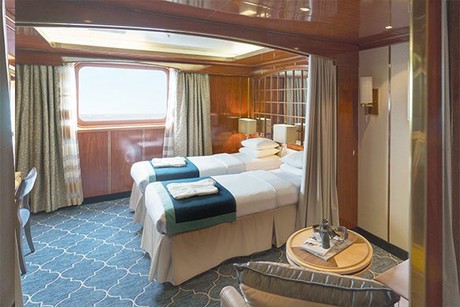 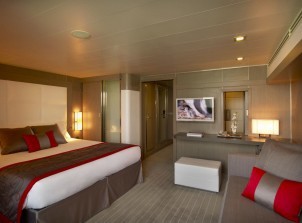 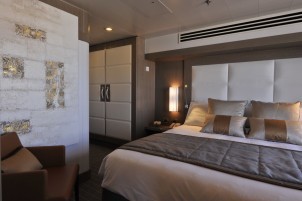 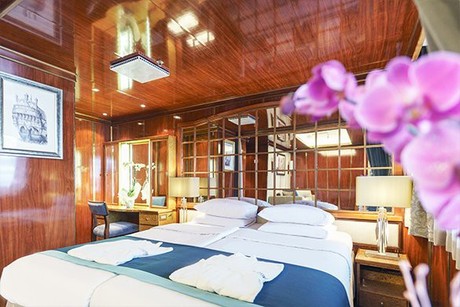 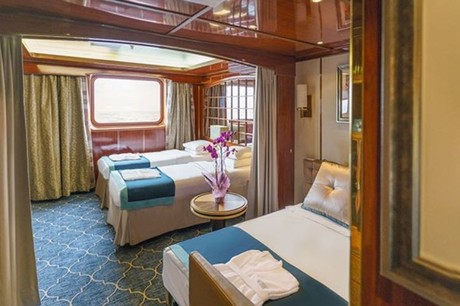 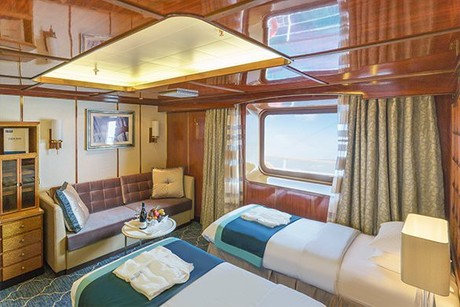 After breakfast on board Sea Spirit we say farewell in Leith, Edinburgh’s vibrant port district. We provide transfers to the airport or to Edinburgh city center if you wish to spend more time in the wonderful capital of Scotland.

Bass Rock is an uninhabited island in the outer part of the Firth of Forth in the east of Scotland. This bastion of volcanic rock, also known as “the Bass”, plays host to over 150,000 northern gannets in the breeding season, making it the world’s largest colony of these magnificent birds. The island’s steep walls are white with guano and the sky all around is darkened by the vast multitude of seabirds in flight. Our voyage is perfectly timed to coincide with this amazing spectacle—truly one of the wildlife wonders of the world.

On the uninhabited island of Mousa we find the famous Broch of Mousa, the finest preserved Iron Age fortification in the British Isles. At over 40 feet tall, this 2,000-year-old round tower is the tallest broch still standing and is among the best-preserved prehistoric buildings in Europe. The island itself supports a rich diversity of plant life and is also known for grey and common seals, Arctic terns, and a significant colony of storm-petrels. We come alongside at the port of Lerwick on Mainland, the largest of the Shetland Islands. On a walking tour of this historic town we visit the award-winning Shetland Museum to learn all about Shetland’s fascinating heritage and culture. From here we take a scenic overland coach ride through the fertile countryside of Dunrossness to discover Shetland’s best destinations. Birders will relish the opportunity to visit the historic lighthouse at Sumburgh Head, the southernmost point of Mainland Shetland. These rugged cliffs attract thousands of seabirds and the grassy slopes above are particularly great for enjoying close encounters with puffins amongst beautiful wildflowers. Also on the itinerary is Jarlshof, one of the most remarkable archaeological sites in the British Isles. Here we discover beautifully preserved stone structures spanning 5,000 years of human settlement, including Bronze Age oval houses, Pictish wheelhouses, an Iron Age broch, a Viking longhouse and a mediaeval farmhouse. On Fair Isle—an isolated island of rolling moorlands and rugged coastlines—one is easily enchanted by historic crofts, picturesque lighthouses, and friendly locals. Here we find the internationally renowned Fair Isle Bird Observatory. The island is famous among birders for its abundance of British birds and for its numerous records of eastern rarities and migrants. Fair Isle is also one of Europe’s best places to watch seabirds, especially puffins, at close range. Additionally, the island is notable for the abundance and diversity of its wildflowers. Seals are also commonly seen in its bays. Finally, during our visit it will be possible to see and purchase articles hand-knitted in the intricate and distinctive style for which Fair Isle has been celebrated for hundreds of years.

Upon arrival at the historic port of Kirkwall we embark on an overland tour of Mainland, the largest of the Orkney Islands off the northeastern coast of Scotland. Attractions such as the well-preserved 5000-year-old village site at Skara Brae and the ancient Ring of Brodgar within the UNESCO World Heritage Site “Heart of Neolithic Orkney” showcase the world-class cultural heritage of the island. Back in the charming village of Kirkwall we also find the impressive Saint Magnus Cathedral, built in the Romanesque style by Vikings in the 12th century.

The Outer Hebrides, also known as the Western Isles, are a chain of dramatically rugged islands off the west coast of mainland Scotland. The most isolated of these is St Kilda. This remote and storm-ravaged island was continuously inhabited for at least two millennia by peoples of extraordinary hardiness. But as the modern world closed in after World War I, the remaining inhabitants chose to evacuate. Now we find only their rough stone buildings and distinctive storehouses called cleitean, all set amidst some of the most dramatic island scenery in the British Isles. Nature-lovers will be delighted, as the island is home to hundreds of thousands of seabirds, two early types of sheep, and over 130 species of flowering plants.

Weather permitting, we also plan to visit the uninhabited island of Staffa. This island of volcanic origin is easily recognized by its striking colonnade of hexagonal basalt pillars. Here we hope to explore the island’s most famous feature, Fingal’s Cave. Reaching deep into the island, the undulating sea plays upon the stunning matrix of columnar basalt to create an eerie melody which was the inspiration for Felix Mendelssohn’s Hebrides Overture. The rugged island also provides nesting sites for seabirds including guillemots, razorbills and puffins. Today we also explore beautiful and serene Iona, a small island in the Inner Hebrides just off the Isle of Mull in western Scotland. At the gorgeous Iona Abbey, founded in 563 AD, we are spellbound by one of Scotland’s most historic and sacred sites and indeed one of the oldest Christian religious centers in Western Europe. The adjacent graveyard is said to be the final resting place of numerous medieval kings, including Macbeth. In addition to its historical and religious significance, Iona is well known for its soul-soothing tranquility, white sand beaches and excellent birdwatching.

We disembark at the small seaside resort town of Portrush in Northern Ireland. We travel overland to the world-famous Giant’s Causeway. Here we discover a geological masterpiece—40,000 closely packed hexagonal basalt columns of varying heights descending like a staircase into the sea. According to legend, the columns are the remains of a causeway built by a giant. In this area we are also able to spot various seabirds such as fulmar, petrel, cormorant, shag, redshank, guillemot and razorbill.

Our port for today is the vibrant seaside town of Llandudno in the north of Wales. From here we embark on a scenic overland tour of Snowdonia National Park. We drive through some of the wildest and most dramatic landscapes in Britain as we discover craggy mountains, stunning waterfalls, crystal clear lakes, dense woodlands and flowering meadows. Snowdonia is also renowned for wildlife including otters, water voles, wild ponies and rare birds such as dotterel and peregrine falcon. We enjoy a delightful stop at the charming and distinctively Welsh town of Betws-y-Coed in the Gwydyr Forest.

With good weather and the permission of authorities, we plan to visit the Skellig Islands. These remote, uninhabited rocky islets off the southwestern coast of Ireland are a favorite breeding site for seabirds, including thousands of Atlantic puffins and a large colony of northern gannets. Other bird species breeding here include the European storm petrel, northern fulmar, Manx shearwater, black-legged kittiwake, common guillemot, and razorbill. The rich waters around the islands are home to whales, dolphins and seals.

The Isles of Scilly is a group of small islands off the coast of Cornwall boasting mild weather, secluded beaches, enchanting wildlife and a relaxed lifestyle. On the lovely, sand-fringed island of Tresco, Bronze Age burial sites and romantic 17th-century castle ruins reveal a long and dramatic history. On the hallowed grounds of a Benedictine abbey we discover the exquisite Tresco Abbey Garden with its spectacular collection of more than 20,000 exotic plants from all corners of the world. Here we also find the Valhalla Museum, a collection of colorful figureheads salvaged from the islands’ shipwrecks. Delightful cafés and local shops enrich your experience even further.

Welcome to the port city of Plymouth in southwest England, where a rich maritime heritage sets the mood for the beginning of our exciting voyage. In the afternoon we welcome you aboard the luxury expedition ship M/V Sea Spirit. Explore the ship and get settled in your comfortable and spacious suite. Then join us on deck and feel the sense of adventure build as we slip our moorings and sail out of the historic harbor. 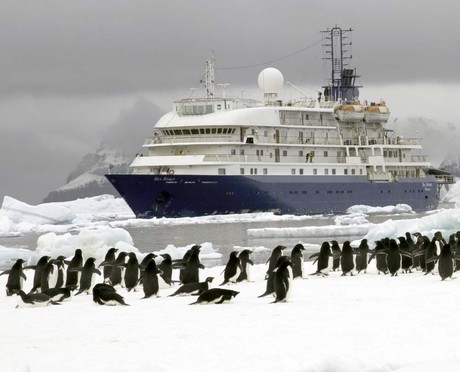 Sea Spirit is a luxury expedition cruise ship, specifically designed to cruise the Polar regions. Carrying a maximum of just 114 passengers in 57 suites, she has the feel of a boutique hotel. Built in 1992, but refurbished several times since, the latest being in 2019, she is just 90 metres long so can navigate the small channels and bays of the Polar regions.

There is a lounge, bistro and bar, hot tub, gym, a state-of-the-art presentation room and stabilisers for smooth cruising. There is an open bridge policy so you can join the captain and the officers at any time of day to watch the ship's operations or just check your exact location.

Some cabin plans may vary depending on the cruise, please check for details. 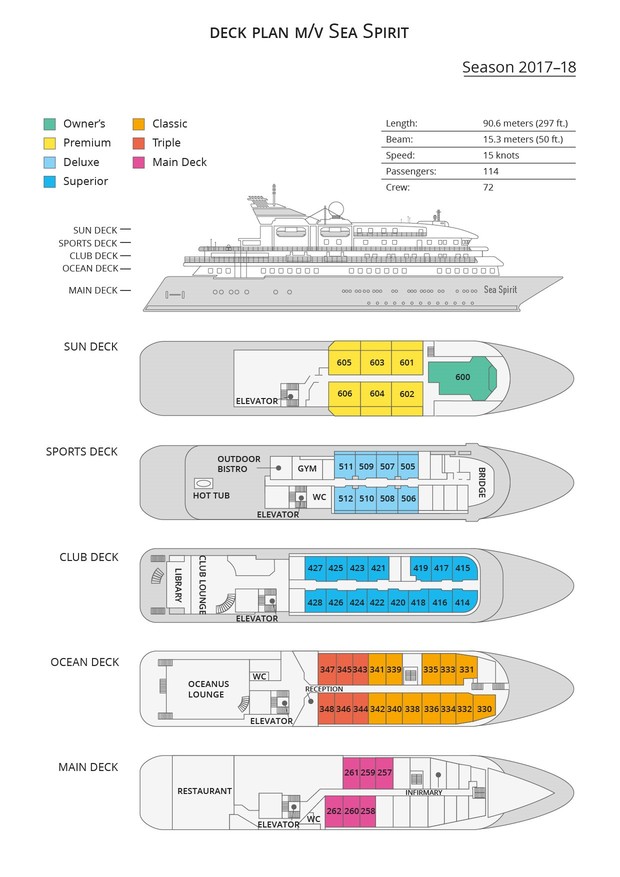 "Group transfer to the ship on day of embarkation;

All meals on board throughout the voyage;

Leadership throughout the voyage by experienced Expedition Leader & Expedition Team;

Expedition softshell; Rubber boots for shore landings for the time of the cruise;

Group transfer to airport or central location upon disembarkation;

Mini Cruise Around Scotland: Isle of Skye & the Small Isles (St Hilda)
A mini cruise around the sea lochs of the Isle of Skye and the Small Isles (Muck, Eigg, Rum and Canna) has to be one of the bes...
read more
Heart Of The Highlands
This seven night voyage on board the deluxe ‘Lord of the Glens’ encompasses the main highlights of a voyage through the very he...
read more